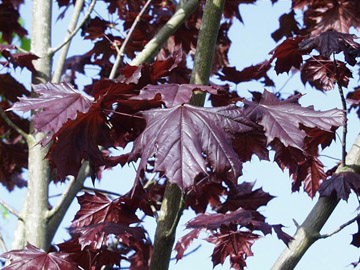 Bark is a type of tissue that grows over a tree’s wood. It has both an inner and outer layer. The inner layer is living tissue, and the outer layer is dead tissue. Trees use bark for protection. It helps move nutrients throughout the tree, and stores tree wastes in its resin and dead cells

Just like flowers and leaves, tree bark has many unique qualities and characteristics, and can be used to help identify a tree’s species. There are more than a dozen terms used to describe bark, including smooth, peeling, cracked, scaly, ring and different types of cork. A tree’s trunk bark often looks different than the bark of it branches or stems.

Maple tree varieties have one of the largest variations in bark. The Rocky Mountain maple (Acer glabrum), also called the Douglas maple, is an ornamental tree native to the Pacific Northwest with a tight and smooth grayish bark. The bark of the vine maple (Acer circinatum) has a red hue, and big leaf maples (Acer macrophyllum) have grey or reddish brown bark that develops shallow groves and ridges when the tree matures.

The autumn blaze maple (Acer x freemanii ‘Jeffsred’—a hybrid cross between a silver maple and a red maple tree) has reddish bark, while the bark of the Crimson Sentry Maple (Acer platanoides ‘Crimson Sentry’) is black and furrowed. The paperbark maple (Acer griseum) has a paper-like bark that peels.

Most pine trees have a thick, scaly bark. There are also some species of pines with thin bark that flakes. Pine bark extract, which is made from mature pine trees, is considered a strong antioxidant. The bark of the Zebrina Pine (Pinus wallichiana ‘Zebrina’) is a gray-brown that develops grooves and a plate appearance as the tree gets older. The western white pine (Pinus monticola) bark is dark. As the tree matures, the bark breaks up into small rectangles. The Jefferey pine (Pinus Jeffreyi) has flakey bark that looks like pieces of a jigsaw puzzle. As the tree gets older, the color of the bark turns a red-brown.

Dogwood tree bark has a scaly appearance and can be easily peeled from the tree. The Satomi Dogwood (Cornus kousa ‘Miss Satomi’) has gray peeling bark. On mature trees, the bark of the Chinensis dogwood (Cornus kousa var. chinensis) is a mottled tan and gray.

Tree bark has been used for spices, medicine, resin, latex and cork, and to make rope, canoes and cloth. It has also been made into shingles or other types of wall coverings.

If you are planning on purchasing a big tree for your landscape, learn more about tree bark from a big trees specialist. An expert in big trees can give you tips and advice on what type of tree to purchase for your environment.